You've probably noticed that gel polishes (sometimes called no-chip polishes) are HUGE right now. They've gone from a professional-only service to being available in every drugstore.  I've never been interested in them because I just don't like wearing the same polish for more than a day or two, and with gel polishes you either have a four week commitment to a color, or you have to endure a 30+ minute removal process.

But one day, as I was gazing down at my disappointingly short-lived pedicure, it dawned on me that I could use these on my toes too.  I mean, I always knew I could, it's just that I had no desire to actually do so until that very moment.

I had a couple different gel polish sets sitting around waiting to be tried, so I decided to compare a no cure gel with an LED gel. 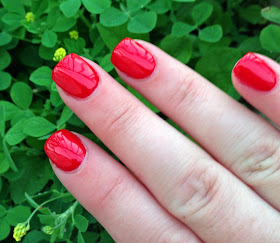 This system is super simple. It's only two steps: Primer and Colour Activator. You prep your nails by cleansing them of all oil and moisture, and then you apply the primer to all nails on one hand. You immediately follow with the Colour Activator (which is the polish part).  A final coat of Primer seals the color and you're done. No curing. No dry time.

The texture took a bit of getting used to, but application was very simple. The Primer is basically superglue or nail glue. The Colour Activator is the tricky part- it spreads out really fast when it touches the primer. I eventually learned that I could just apply a drop of Activator in the center of my nail, on top of the primer, and it would spread to cover the entire surface.

The end result was a bit lumpy (hey, it was my first try) but looked and felt great. Smooth, glossy, hard. Unfortunately, it chipped right away. 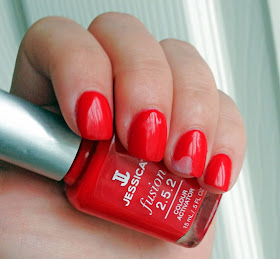 Luckily for me, removal was easy.  Five minutes in foil with Jessica's Flash Off remover and it was done. It has the texture of nail glue, so it just dissolves with the remover.

I would definitely use this again as a pedicure since it was so fast and easy. It has its downsides, but I really liked the quick removal compared to LED gel.

This set was sent for review, but it can be purchased online directly from Jessica here. 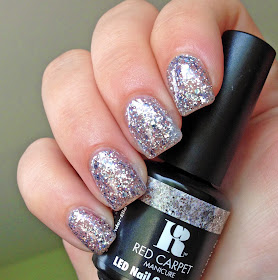 The Red Carpet Manicure LED Gel has more steps, but it also has a much longer lasting end result.

You prep your nails with a sanitizer, apply base coat, cure, color, cure, color again, cure, topcoat, cure, and then wipe away the sticky layer and you're finally done. It's not complicated or difficult at all, it just takes longer.

I like the texture of the products. They're thick but they don't set so you have some time to play around with them and get your glitter placement right before you cure it. I think I applied my glitter a little too thick, but I was trying to get it opaque in two coats so that's my fault. I don't think Cinder-Ella was meant to be an opaque glitter.

The gel polish in this system cures with an LED light that has a timer built in. You place your hand under it, hit the button, and then it turns off after 45 seconds (there's also a portable version of the LED lamp that takes a little longer, but I have the plug-in one.)

This gel polish was extremely sturdy and chip-proof for as long as I wore it. I only had it on for a week because... why would I want to wear this color for more than a week? I can't fathom it. Hah!

The huge downside for me was the removal. It takes FOREVER. You need to file the shine off the nails, soak them with remover for 20-30 minutes, and then they're supposed to slide off, but they don't. You gotta scrape a little, and then sometimes soak a little longer to get down to the bottom. Removal was such a pain for me that I'd be hesitant to use anything but clear gel if I used these again.

I bought my Red Carpet Manicure supplies from Ulta.

If you like wearing the same color for a really long time, these at home soak of gel systems are really user-friendly. I don't think gel polish is for me, but I can see why people like it.  I liked both of these types of gel polish, but I preferred the easier removal of the Jessica system.  Maybe there's another brand out there that removes just as easily. Do you know of one? I'd totally try it.