First, let's set things straight. I don't do Gossip Girl. I've never seen an episode, don't know the name of a single character or actor in the show, nor do I care to. That said, if there's some sort of inside joke in one of the names of these polishes or it somehow relates to something in the show, I'm oblivious to it! So I can't comment on that aspect. But, I can comment on the gorgeous colors... 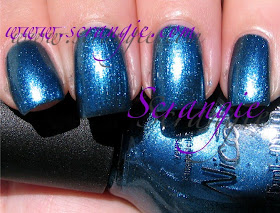 Party in the Penthouse. Gorgeous medium blue foil. It doesn't have the typical foil polish texture, but it does have a glimmering metallic foil finish. The texture actually reminds me more of something like Zoya Kotori- bright metallic particles in a sheer blackened base. Same with Too Rich For You. This was pretty sheer for me so I used three coats. Looks great at three coats, very sparkly. 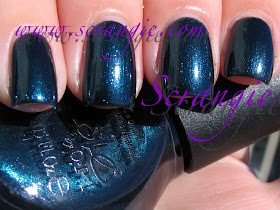 Too Rich For You. A dark smoky blue shimmer with green tones. Looks like it has a lot of duochrome in the bottle but isn't really duochrome once it's on the nail. Again, similar to Zoya Kotori with the sheer smoky black base and the bright shimmery particles. This one was also sheer and I did use three coats to get rid of the visible nail line. The end result is quite beautiful, don't you think?

And now on to the best part... the glitter shades! 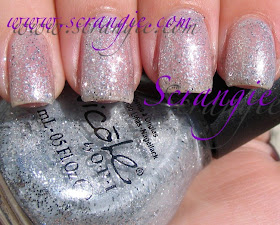 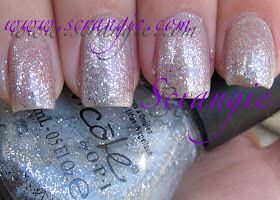 Scandal, Secrets and Sparkle. I think that's in the right order... all I remember is it was three S words! This is a medium-sized silver glitter in a sheer silver shimmer base. Very much like Zoya Luna or China Glaze The Ten Man. The base of this isn't so much colored as it is filled with little shimmer particles, so it gives a milky look that shimmers when sunlight hits it. Very sheer, probably best for layering. If you want a less-sheer version of this color to wear alone, Zoya Luna is your best bet. However, Luna is too opaque for layering, so if you're looking for a layering glitter, Scandal, Secrets and Sparkle is the better option. 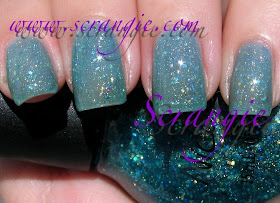 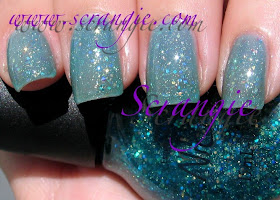 Nicole...Spotted! I saved the best for last. Man, do I ever love this polish. It's a sheer aqua gel-like base with super tiny golden-green iridescent sparkles (micro-micro glitter?) and small sized pastel iridescent/opal glitter- mainly colors of pale yellow, green, blue and orange. This is just so much prettier than other polishes of this type.... I know I have a few, the first one that comes to mind is Sinful Nail Junkie. Nicole...Spotted! is so much more sparkly and lively, it never falls flat. I layered it over tons of things and it looks good over pretty much everything. Here's a couple layering combinations: 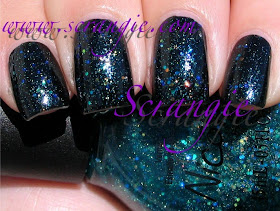 Nicole...Spotted! over OPI Unripened. Here's what it looks like over a black based shade. Smooth, sparkly, mesmerizing, adds a slight blue tint, too! 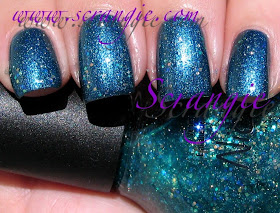 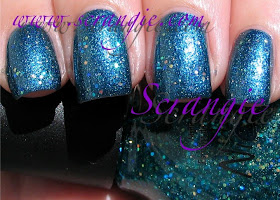 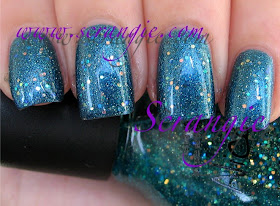 Nicole....Spotted! over Party in the Penthouse. Looks good over a foil, too. Looks... oceanic? Looks like blue ocean water with colorful rocks below the surface. 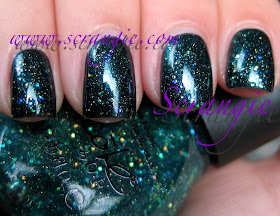 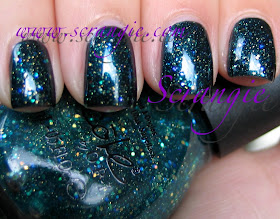 And my favorite combination so far... Nicole...Spotted! over Too Rich For You. You might want to enlarge these pictures to really enjoy the delicate golden sparkle in this. It's so bright and awesome. I'm obsessed with it now. 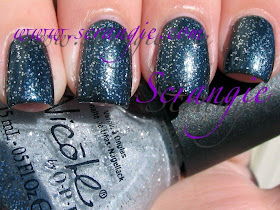 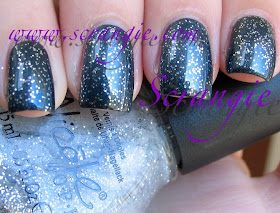 Scandal, Secrets and Sparkle over Too Rich For You. See how indoors it looks cloudy and in sunlight it looks sparkly? That's the little particles of white-silver shimmer in the base. Very odd look, it changes so much from indoors to outdoors.


The formula on these wasn't the best. The two dark shades, Too Rich For You and Party in the Penthouse, were rather sheer and a little watery and needed three coats to be totally opaque. I'm used to a thicker, more opaque polish formula now and these were a little bit of a surprise! The glitter shades were perfectly normal, though. Not thin, not too thick or glue-like either, nice and smooth. They are also sheer, I did three coats in these pictures and one coat for layering. Drying time is great. The glitters aren't super lumpy but they do benefit from thick topcoat as most glitters do... they look amazing under that shiny glassy layer of Seche Vite....

Overall, not a bad set... But I'm most enthusiastic about Nicole...Spotted! I can't even see the other colors... I only have eyes for Spotted. It's fantastic. Looks good alone, over black, over blue, over creme, over shimmer... It just looks good, period! (And then exclamation point?)

If you're looking for these, I saw them on clearance at Target just this week! They also have huge cardboard displays of them at Meijer, but they're full price there.

(These were sent to me for review.)
Scrangie at 9:25 AM
Share