I have to get used to calling these "Deborah Lippmann" now instead of Lippmann Collection... Maybe I'll just refer to them as Lippmann from now on. Confusing!

Anyway... Lippmann's been cranking out a ton of glitter shades lately. Maybe after Happy Birthday became their best seller they're starting to realize how much we all adore unique glitters. Across the Universe was nothing short of genius. Very happy to see them experimenting with the rarely-disappointing jelly/glitter combination. This is the latest: 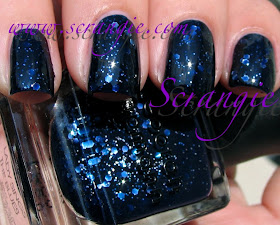 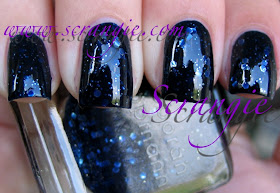 Lady Sings The Blues. This is a deep blue creme base with silver sequins and glitter. It's not quite a jelly... The base is a little sheer but it's also mostly opaque. I actually think this might have looked better if it was more sheer. The base is a little too dense and doesn't allow all the glitter to show through. It's not lumpy or chunky, but some of the glitter does get lost. Other than that detail, this is a very beautiful polish. Takes a page out of the Essie Starry Starry Night Polish Success Manual. Heh. 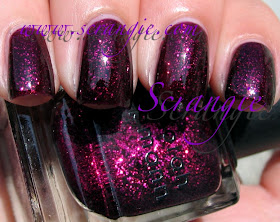 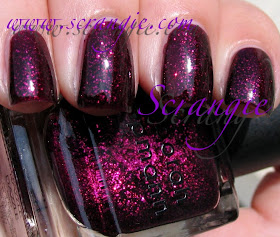 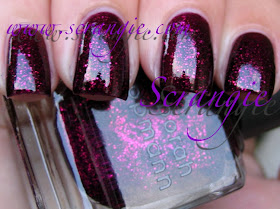 Razzle Dazzle. Had to get pictures at a couple different angles for this one. It's just too beautiful. In my opinion, this is the best one in the set. It's rich blackened raspberry jelly with magenta and red glitter. It is freaking spectacular. I can't get enough of this. It looks so sparkly and deep and dramatic, it's like pink lava or a river of gemstones on your nails. The only downside? It stains like crazy. I put it on when it arrived and wore it less than an hour (accidentally smushed it while cooking, had to remove) and when it came off, my nails were stained rose pink. They still are on my right hand, actually. I did not expect that. Staining really doesn't bother me because I'm never without polish on my nails, but people who are less accepting of staining might want to take precautions with this one. 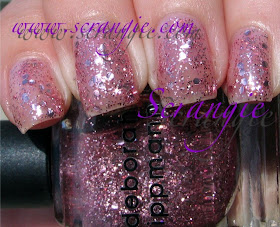 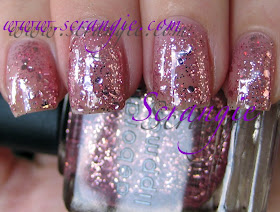 Some Enchanted Evening. I feel like I'm always complaining about glitters that are this color... Whenever companies decide to do a pink glitter, 99% of the time it's this exact shade of pink. It's the color of Milani Disco Lights, to give you a reference point. Despite this, I actually love this polish. It has two kinds of glitter- fine and large sequin. It's in a clear base. It's ideal for layering but I actually prefer it alone, as pictured here. The effect it gives is positively magical. The glitter in it is very sparkly and sometimes flashes red and silver instead of just pink (as observed in the indoor picture) and it looks light and delicate all by itself. I am starting to actually enjoy certain sheer colors and this is one of them.

I compared Razzle Dazzle to Good Girl Gone Bad (from the Party Like A Rockstar kit) because they reminded me of each other. Turns out they're not really duplicates but they are somewhat similar: 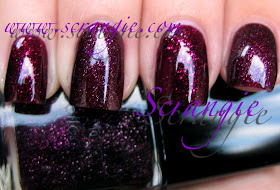 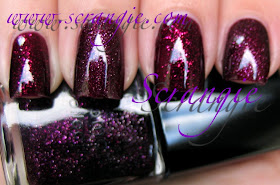 Razzle Dazzle is redder, more opaque, has larger glitter and the glitter is red-based. Good Girl Gone Bad is quite sheer, is more purple toned and has tiny silvery glitter. They're both worth owning as they're completely awesome.

The formula on them was good. Not too chunky, not too thick. Good opacity and glitter density. I did two coats in these pictures but I'm sure a third coat would be even better. Drying time was longer than usual for Lippmann but still within acceptable range for me. They are not super bumpy but still look best with a coat or two of a thick topcoat like Lippmann Addicted to Speed (or Seche Vite, Diamont, Poshe, Barielle Mani Extender, the thicker the better!) The only flaw I could find with these is the tendency Razzle Dazzle has to stain. I did not experience any staining with Lady Sings The Blues or Some Enchanted Evening.

Currently these are only available as a set, but if the past is any indication of future events, they'll probably be available as individuals eventually. I don't know for sure, though... Just speculating. Though I'm sure that if you emailed them enough asking for them to be sold separately like with the Anniversary set from last year, they'd do it.

(These were sent to me for review.)